How to Make Greek Yogurt at Home by Chef Maria Loi 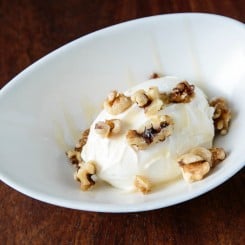 Chef Maria Loi shares a delicious Greek yogurt recipe she learned from her grandmother. Learn how to make an awesome Greek yogurt at home.

How To Make an Authentic Greek Yogurt at Home

You can eat the yogurt like this, but if you want to make my grandmother’s authentic recipe, you need to take one more step:

Common mistakes to avoid when preparing a Greek Yogurt

Maria Loi’s warmth and huge smile are your first welcome. Her table’s colorful bounty is fresh, festive, healthful and reminiscent of her days growing up along the seaside in Greece.  The dining space echoes with laughter, comfort and delightful conversations; this is where memories are made.  Everyone seated at the Loi table feels like a special friend, carefully chosen to share this life.   With Loi, modern knowledge and ancient lore are carefully blended to create a new brand of “soul” food—dining that is as good for your soul as it is for your body.

When Maria Loi chooses ingredients and creates recipes, she considers the ancient grains and flavors that continue to flourish millennia later.  This is an area of expertise; her book on ancient Greek dining was the only official cookbook of the Athens 2004 Olympic Games. These ingredients, as respected as the great Greek minds of Plato, Socrates and Hippocrates, are the pillars of a healthy, tasty Mediterranean diet: olive oil, Greek yogurt, grains, beans and freshly picked greens.  Maria Loi’s food is about truth in flavor.  Hers is a philosophy derived from the warm, scented Greek air and the sounds of loved ones around the table.

Maria Loi’s mischievous grin, sparkling eyes, and culinary prowess have made her a food superstar; she is a popular television chef in Greece and the author of more than 36 cookbooks, and over 150 magazine editions.  She owns an exquisite gourmet restaurant in idyllic Nafpaktos and has a line of Maria Loi dinnerware and kitchen appliances.  The Chef’s Club of Greece, a worldwide culinary organization has recognized her as the Global Ambassador of Greek Gastronomy; in June of 2016, she was unanimously re-elected for a second term as the official Ambassador.  She is also the founding partner in a fashion company.

Maria now shares her expertise and knowledge with American audiences.  She quickly earned a reputation as the U.S. leader in authentic Greek cuisine and ingredients: In March 2012, Maria was invited to cook for President Obama, Vice President Biden, and 250 honored guests at the White House.

Her latest book, The Greek Diet (October 2014, HarperCollins), written with veteran health journalist and athlete Sarah Toland, is grounded in the Greek Mediterranean lifestyle and combines these classic ingredients in recipes that satisfy the soul and the palette.  The Greek Diet includes 100 healthy, authentic Greek recipes that use delicious unprocessed ingredients that will delight amateur and experienced home cooks.  The Greek Diet has been translated in Portuguese for publication in Brazil, and has been translated in Greek for publication in Greece as well, with more editions on the way.

Her pasta line, Loi Pasta launched at Whole Foods Market in March of 2016.  Her new line of dips, Loi Dips, officially launched exclusively at Whole Foods Market in January 2017, and is expanding distribution rapidly, with other Greek products hitting shelves in mid-2018, including her fresh-frozen meal line from Loi Pasta.  She is a frequent television guest and speaker on the topics of Greek cuisine and culture, and healthy eating.  Chef Loi was invited as one of America’s top six female chefs by Fortune Magazine and James Beard Foundation to the 2014 Fortune: The Most Powerful Women Summit.  Her restaurant, Loi, was a favorite of the media and celebrities and a staple on New York’s Upper West Side from 2011 to June 2014.

Chef Loi has brought her unique approach to Greek cuisine to Loi Estiatorio, her flagship restaurant in the heart of Manhattan, an ode to the flavors of Greece (opened February 2015).  In January 2016, Chef Loi was the inaugural chef of The Ritz-Carlton Central Park South’s Kitchen-Takeover series, which received rave reviews.  In April 2016, Chef Loi was a panelist at the Mediterranean Diet Roundtable Conference in LA, with professors from Harvard University and other decision-makers in the food industry.  In November 2016, Chef Loi was a judge at the inaugural Ernesto Illy Coffee Awards at the UN, and traveled to Australia as a featured chef for OMG Week, a weeklong festival in Melbourne curated by Chef George Calombaris, with the top Greek chefs from around the world.  In March of 2017, Chef Loi judged the Rapid Fire Challenge at the International Restaurant and Foodservice Show in New York – she reprised her role as a judge in March of 2018.  In May 2017, Chef Loi was the featured guest chef for a Dinner and Discussion Symposium at Harvard University on the subject of her book, The Greek Diet, as a part of a large-scale study featuring the benefits of the Mediterranean Diet.

Chef Loi was named the president of the jury at the ‘World Best Healthy Extra Virgin Olive Oil Contest’ that took place in Malaga, Spain, in late May 2017; additionally Chef Loi was a judge at the Specialty Food Association’s Summer Fancy Food Show: Front Burner Pitch Competition, a revered appointment, at the end of June 2017; for the 2018 Summer Fancy Food Show, she was a judge for the SofiAwards, which name the top new specialty food products on the marker.  In March of 2018, Chef Loi was a keynote speaker at the 2nd Annual World Happiness Summit in Miami among the leaders across multiple fields, speaking about the connection between sustainable happiness and food and nutrition in her talk titled ‘Purpose in Action’.

Recently, Chef Loi is featured in a documentary titled, “A Fine Line,” featuring world-renown female chefs, highlighting the discrepancy in gender roles and ratios in the culinary industry – the film is currently on the festival circuit receiving high accolades.  In May 2018, Chef Loi was one of four chefs selected by the European Union delegation of the United Nations to represent their native countries at the inaugural Taste of Europe NYC event at Eataly.  Chef Loi will be traveling to Taranto, Italy in June 2018 with Harvard University to present their collective findings on the health benefits of the Mediterranean Diet to the University of Bari School of Medicine.

Chef Loi is deeply involved in Greek and American causes that care for children in need.  She is a founder of Elpida (the Greek word meaning “hope”), a foundation to support children with cancer. She oversees a fund that grants university scholarships to underprivileged students.   Chef Loi also works closely with The Center for Discovery and their Department of Nourishment Arts as a DaVinci Master Chef.  In June of 2015, Chef Loi received the prestigious Women’s Award from the Women Together Foundation at the United Nations, honoring her for the philanthropic accomplishments over the years, focusing on her time since moving to the United States.  In May of 2016, Chef Loi received the Leadership Award from Save Latin America Inc. for her work empowering women across multiple fields.  Chef Loi was inducted in September 2016 into the New York Chapter of Les Dames d’Escoffier, the pre-eminent global women’s organization in the areas of food, wine, and hospitality.

During her diverse career, Maria spent many years representing clients Texaco, Nokia and ITT Sheraton among others.  This rewarding yet fast-paced life, long hours and travel separated her from her roots and the Greek traditions of family, food, balance and nature.  From that experience, Maria developed a lifestyle program for all that would nurture a healthy body and soul, influenced by the Greek ancients!

Ultimately, her mission in life is simple, subscribing to THE Loi motto – tasty, healthy, easy – Chef Loi wants to change the world – one healthy, Greek bite at a time.