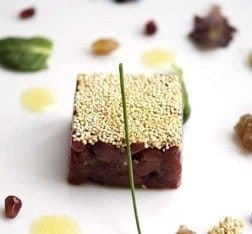 He brings with him a passion for food that developed at the age of 10 when he sampled a three kilogram stuffed hen his grandmother cooked. In a heroic feat, he managed to eat it all by himself. His mouth still waters when he thinks of it and experiences such as these helped inspire him to undertake training at the Art, Science and Technological Centre of Food in Brescia and the Caterina de Medici Hospitality School.

Alessandro began his career in Brescia, in Italy’s north, working at Carlo Magno with the famous Iginio Massari and Giuseppe Maffioli. After working in various Michelin starred venues such as La Rotonde in France and the two Michelin-starred Villa Fiordaliso on Lake Garda, Alessandro broadened his culinary horizons working in Bermuda at the famous Restaurant Lido before moving to Sydney permanently in 2003. He assumed the role of Executive Chef at Park Hyatt 2005, managing a team of over 30 chefs before finally realising his dream of opening his own restaurant at the Spit, Mosman in 2009.

Ormeggio at the Spit was a most welcome addition to the North Shore dining scene and was quickly recognised as one of Sydney’s premier waterside dining destinations. It was awarded a coveted Chef Hat in the Sydney Morning Herald Good Food Guide after only 9 months, had two Glasses awarded by Gourmet Traveller to its unique wine list, and is also listed in Gourmet Traveller’s Top 100 and The Australian’s Top 50 Australian restaurants. It maintains these accolades today with the addition of a second Chef Hat, which was awarded in 2012.

Contemporary flavours, techniques and textures are the focus at Ormeggio, with Alessandro exploring for himself the current Northern Italian offerings. Crave International Food Festival 2012 notes that Alessandro is “one of the few Australian chefs exploring the cutting-edge of contemporary Italian cuisine.”

“The look and feel of Ormeggio is naturally nautical and coastal – with great quality produce and contemporary Italian flavours. We utilise a lot of local organic and biodynamic meats and vegetables and are constantly searching for quality and uniqueness. Given our striking location and dockside setting at D’Albora Marina, and the influence taken from the lakes region of Northern Italy, we also do a lot of beautiful seafood. Our aim is to provide a contemporary Italian dining experience in an exclusive Australian setting.”

As well as this passion for modern and unique cuisine, Alessandro is passionate about safeguarding Italian culinary culture and is the Vice-President of CIRA, the Council of Italian Restaurants in Australia – a group of Sydney Italian restaurateurs proud of their heritage and committed to this cause (www.cira.com.au ). He is proud of his northern Italian traditions and loves to share his knowledge and experiences with his guests.

“I love to embrace traditional recipes that have been handed down through the families of my region, and in particular my grandmother, who was a tremendous cook.”

In 2015 “A Lombardian Cookbook” was released, showcasing the traditional recipes and flavours of Alessandro’s Italian home.

Alessandro cares deeply about helping and educating others and sees this as a central part of his role of Chef and Restaurateur. He regularly delivers cooking classes around Sydney in such locations as Sydney Seafood School, through CIRA’s program at Casa Barilla in Annandale and Accoutrement in Mosman, and hosts tours of the northern regions of Italy.
In 2013 he joined forces with Bill Drakopoulos, the respected Sydney restaurateur of the Sydney Restaurant Group. As well as overseeing the kitchen operations of Bill’s Ripples chain and Aqua Dining Restaurant, Bill and Alessandro made a conscious decision to develop young talent in their business operations. In 2014 he and Bill, together with the Ormeggio Head Chef Victor Moya and Pastry Chef Laura Ballester, opened ‘Ormeggio Bakery’ in Mosman. Victor, Bill and Alessandro followed this with ‘Chiosco by Ormeggio’, a casual seaside Italian trattoria in Mosman. Alessandro and Bill also joined forces with then Ormeggio Sous-Chef, Alex Keene, to open ‘Via Alta’, an Italian trattoria in Willoughby. Sotto Sopra is a relaxed yet sophisticated woodfired trattoria, Located in Newport on Sydney’s northern beaches, it opened early 2017, this time bringing on board Chiosco’s Head Chef, Mattia Rossi. This development and nurturing of young talent and enthusiasm, together with offering opportunity to the ‘next generation’ is something that Alessandro believes very strongly in.

He is an Ambassador for Heart Research Australia, http://www.heartresearch.com.au/our-ambassadors.html, whose work is, as he says, ‘close to his heart’.

Alessandro lives on the northern beaches with his Australian wife, Anna and his daughter, Jada, and son Luca. In his spare time he can be found long boarding on one of the many local beaches, golfing or cooking up a storm in his backyard for friends and family.