La Castagna – The spirit of winter and cold days 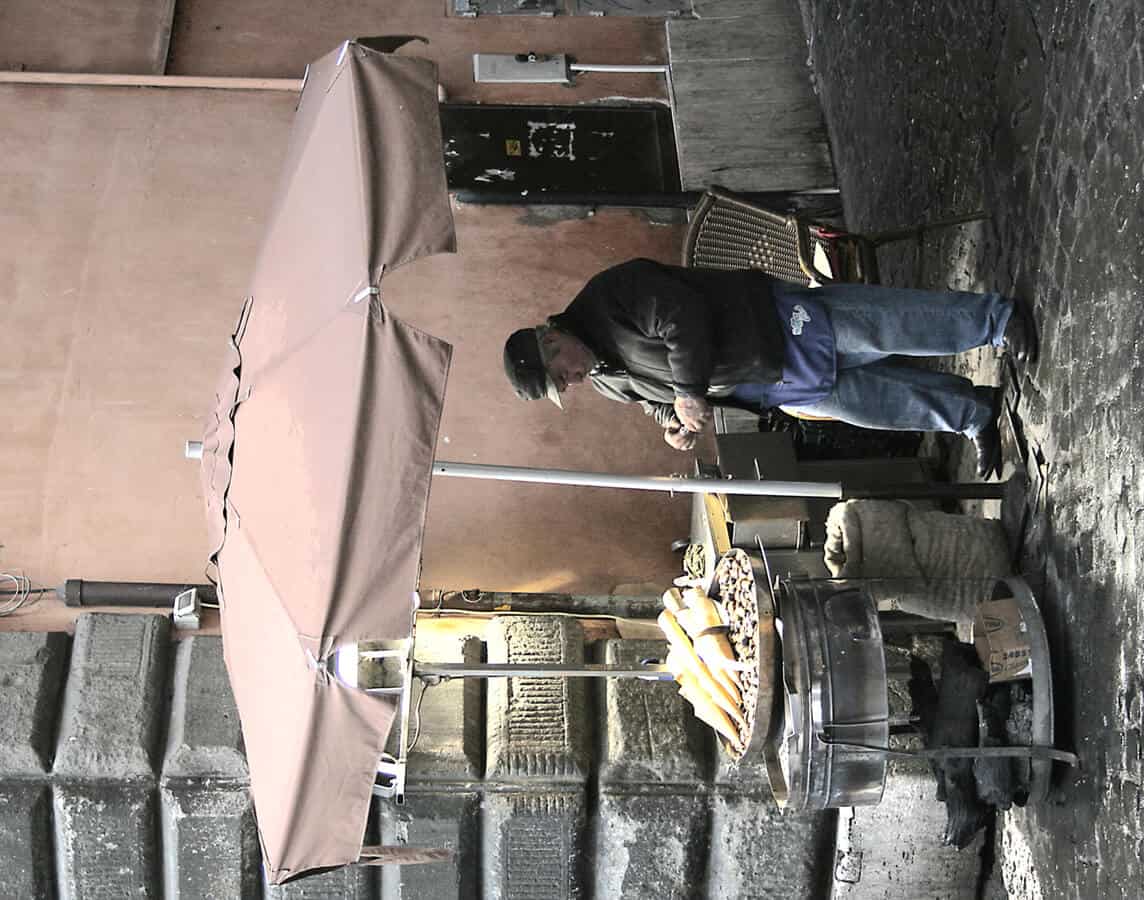 As soon as the days get shorter and evenings foggy and cold, all throughout the Northern hemisphere the chestnut vendors set up their stalls. “Caldaroste”; Italian for hot roasted chestnuts, piping hot and straight from the coals over which they have been roasted. Packaged in simple paper cones served without sauce, dip or any seasoning, roasted chestnuts must be the simplest and arguably one of the most nutritious snacks there is.
A recent trip back home to Switzerland and further on to Italy took me back years and I realized that today’s Chestnut sales stalls and preparations are just exactly the same they were decades ago when I was a kid myself. What a great and wonderful winter tradition roasted chestnuts are! From the iron drums where the chestnuts are roasted to the plain brown paper cones even to the typical blue worker’s pants the vendor wears, this snack, its preparation and presentation or packaging has stood the trials of time and hopefully will remain that way for a long, long time to come.

What a great and wonderful winter tradition roasted chestnuts are!

At the time of the Greeks and Romans chestnuts already had a special place in the diet of the people but not the aristocracy. As wheat was sparse to come by, especially in mountainous and colder regions and during the winter months, chestnut flour was often substituted and used to bake breads and make pastas or noodles, chestnuts were used as the main source of carbohydrates as at that time potatoes had not been discovered.
Chestnuts were also a preferred crop for the long winter months as it was relatively easy to store and provided all the energy needed to sustain winter.

By the Middle Ages chestnut trees were abundant throughout the Alpine region and as far south as Rome. Chestnuts really became the staple food for the farmers and the poor.
Only in more recent times, chestnuts have become a delicacy and undoubtedly some chestnut products deserve to be considered such. There are various chestnut products, commercially available and used throughout our cuisines. Obviously, throughout the season, chestnuts are best used fresh. As they contain a larger amount of water than regular nuts, they need to be kept chilled until used.

Be it roasted over coal on a street corner, as part of our stuffing for the festive turkey or in soups and stews or as purees in desserts and mousses, throughout winter, chestnuts are omnipresent and found on menus from fine dining rooms to casual eateries. The rest of the year, dried chestnuts are available and will do just as well if the fresh product is not available. Dried chestnuts are also milled into chestnut flour, mostly available in specialty stores with the exception of Italy where it is available in regular supermarkets. It is used for various cakes and desserts, and savory dumplings. Most famously though, chestnut flour is used to make small, very light cakes and thick pancakes, which are eaten warm with fresh ricotta cheese. Depending on where they are produced they carry different names, “Pattona” in northern Tuscany, “Castagnaccio” in the centre and “Torta di Neccio” around the picturesque city of Siena.

In France, “Marron glacees” are a popular gift around Christmas time and throughout the year. Giant chestnuts (called marroni in Italy) slowly candied and preserved in sugar. Throughout the alpine region chestnuts are being glazed and served as a side to game dishes and chestnut puree is often pressed as “Vermicelli” (basically chestnut pureed spaghetti) over meringue and vanilla ice cream. This dessert is also called “Monte Bianco” or “Mont Blanc” in Italy and France respectivelym and by sharing the same name with both languages, it bridges borders, cultures and cuisines.

The chestnut vendor (as pictured on a street corner near the Trevi fountain in Rome, Italy) perhaps does not necessarily have all the nutritional facts of the chestnut handy, but in his heart, he surely knows that he sells a natural, pure and nutrient rich product that is good for body and soul. Not only are chestnuts the only nut containing vitamin C and are good sources of the Vitamin B complex, but they are a valuable source of Iron, Calcium, Potassium and Phosphorus. They are very high in fibres, 90% unsaturated fat and are cholesterol and gluten free which makes chestnuts and chestnut products important dietary ingredients.

The chestnut vendor, selling his goods in the freezing cold, warming his hands on the charcoal filled steel drums, is so much more than just old tradition. In a world where snacks are mainly industrial produced, flavored with monosodium glutamate, salt and sugar artificial flavorings, it is great to see that simple, healthy and nutritious pleasures like the roasted chestnuts, are still appreciated and in demand. And hopefully the chestnut vendor will have enough business to support his family and his trade for many years to come. The winter streets in Europe would be depleted by one nice and wholesome attraction without him.