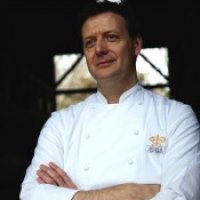 Chef Cartwright’s talents are recognized worldwide, where he has earned the distinctive title of Grand Chef Relais and Chateaux, has cooked at the prestigious James Beard House and most recently at the Versailles Palace in France. White Barn Inn Restaurant had its share of honors, too, receiving hospitality’s highest accolade, a 5-Star rating from Forbes Travel Guide, consecutively from 2006-2012, and AAA’s Five Diamond Award consecutively since 1992 — a record in New England. The restaurant was one of only 12 in the U.S. to share both top honors at once, and Chef Cartwright was one of only 17 Grand Chefs of Relais & Chateaux in the U.S.

Originally from Yorkshire, England, Cartwright has been at home in the kitchen since age 15. He brings to New England an international sensibility and mastery of cuisine gained while serving some of the world’s finest Relais & Châteaux properties including Blantyre in Lenox, Mass., the Horned Dorset Primavera in Puerto Rico, and the Hotel Bareiss in the Black Forest region of Germany. “I believe that my menu creations are influenced by a love of European-style cooking acquired from my experiences,” says Cartwright. “This is fused with the many culinary and cultural inspirations of my present home, coastal Maine”

Before joining the White Barn Inn, Cartwright was Executive Chef of the Relais & Châteaux Horned Dorset Primavera in Puerto Rico. After his training apprenticeships, he continued to study under Anton Edelmann, Maitre Chef de Cuisine at The Savoy Hotel, London. In 1989 while still at the Savoy, he accompanied Edelmann to New York’s Pierre Hotel and to the Four Seasons, Beverly Hills to help with celebrations honoring the Savoy Hotel’s 100th anniversary.

Share
In a thick bottom pan reduce the cognac, Essencia & lobster reduction by half, add the cream & reduce by half. Whisk in the cold, diced, unsalted butter and reserved...