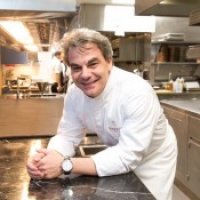 A native of Alsace, France, Kreuther was born in a region whose history has produced one of the most renowned cuisines in France. Raised on a family farm in Niederschaeffolsheim, a small village north of Strasbourg, Kreuther grew up surrounded by fresh local produce and seasonal game and first learned the art of traditional Alsatian cuisine by cooking with his mother. During school vacations, Kreuther often visited his uncle, who owned a bustling hotel and restaurant in the nearby mountains, and at barely 12 years old, Kreuther helped out everywhere, soon discovering the kitchen.

In 1984 he enrolled in culinary school at École Hôtelière in Strasbourg, where he began his formal education and in 1987, won the prestigious “Concours National du Meilleur Apprenti Cuisinier de France – Fernand Point,” a highly competitive national contest that determines the “Best Kitchen Apprentice in France” from among 170 nominees.

After embarking on a work-exchange program in Washington D.C. and working his way up the ranks of Michelin-starred kitchens in Germany, France, and Switzerland, Kreuther arrived in New York City in 1997, where he worked as sous chef at the much-lauded La Caravelle before becoming chef de cuisine at Jean-Georges. In 2002, Kreuther assumed the role of executive chef at Atelier at the Ritz Carlton’s iconic Central Park South location, during which time he was named one of Food & Wine Magazine’s “Best New Chefs.” Under Kreuther, the restaurant was also nominated for “Best New Restaurant” by the James Beard Foundation, received a three-star rating from The New York Times, and also received The American Academy of Hospitality Sciences’ coveted “Five Star Diamond” award.

In 2004, Kreuther joined Danny Meyer to open The Modern, where his cuisine garnered the restaurant critical acclaim and numerous accolades including “Best New Restaurant” from Esquire Magazine, one Michelin star, the title of “Top Rated Newcomer 2005” by Zagat Survey, and “Best New Restaurant” by Time Out New York. The Modern also received a glowing three-star review from The New York Times, and the 2006 James Beard Foundation Awards for “Best New Restaurant” and “Outstanding Restaurant Design.” Having been nominated in 2006, 2007, and 2008, Kreuther himself won the James Beard Foundation Award for “Best Chef: New York City” in 2009.

After nearly a decade as executive chef of The Modern, he moved on to open Gabriel Kreuther in June 2015. Here, Kreuther combines his classic French training with his love of New York City dining to create a comfortably luxurious experience in the heart of Midtown Manhattan. Since opening, Gabriel Kreuther has received three stars from The New York Times and been awarded a Michelin star.

When Kreuther isn’t in the kitchen, he is a member of the Bocuse d’Or Culinary Counsel, and was proud to be part of the 2015 coaching team for the silver medal-winning United States team.

Share
Sauerkraut Rinse the sauerkraut in cold water, drain it in a colander and then press out the excess of water with your hands. Sweat the onions and garlic in a saucepan...